Worth a read, from the Portland Observer, here.

We are posting this picture very seriously, because Bobby says Turtle Talk is very serious.

Here are the category finals in all four categories:

Alaska Native tribes knock off the Wisconsin Oneidas, who made a very good showing against the northwest leviathan, but Alaska wins 68 percent. And, yes, there is internet in the UP, or there are just plenty of downstaters (hearing me Port Huron?) banking on the BMIC casino? The Gun Lakers only garner 41 percent of the vote.

So the two big tribal winners of the year face off.

Category 2 — Laws, Doctrines, and other stuff

Oil and water face off. We at Turtle Talk know for a fact that ICWA and tribal immunity cases absolutely dominate the federal and state cases we see almost every day here. You can make your living on these two, so long as you’re willing to work for next-to-nothing as an ICWA attorney and so long as you don’t try to make a living suing Indian tribes.

Sarah Deer gave her a serious run for her money, but fell by a mere two percentage points in the most highly contested (the most votes that is) pairing of the third round. Judge Hemetewa prevails again but only to face the most recognizable and fabulous Supreme Court Justice in history. Yes, I said that.

The 1491s sneak past the Cohen Handbookies with 54 percent of the vote. Did I call it or what? All four top seeds are in the final eight. They appear to be in serious trouble though as the Tribal In-House Counsel Association is gaining unbelievable momentum, absolutely crushing the Carcieri beneficiaries with 78 percent of the vote. Of course, that might merely be a question of popularity because who likes those guys anyway? TICA’s going to have to rely more on beneficence to defeat the staggering monolith that is the 1491s.

Now for the other half of the bracket.

Notably, this is an all-woman category semifinal. Damn right.

It appears the number of people who reject NFL racism outnumbers the Cobell class pool; I’d say we have a victory of humor over angst. And it wasn’t close, as the 1491s win 61 percent of the vote.

In the other matchup, Cohen outran Ma’iingan, which is saying something.

This semifinal reminds me of the theme song to Pinky and the Brain — one is a genius, the other’s insane. But which is which?

In a massive upset, upstart TICA knocks of the Supreme Court project with 65 percent of the vote. No, I’m serious.

This sets up a huge round-of-16 matchup between TICA and the Carcieri beneficiaries In other words, will principle defeat market share?

Now we move onto the Category 4 hurricane, groups.

I guess I forget, being in Michigan, that Cobell’s billions are pretty influential. This will be an interesting match-up. The 1491s better hope the beneficiaries aren’t out there buying votes.

Are the law profs hunters? Or will the wolves outthink them? Whozit gonna be?

TLPI nearly pulls off the largest upset of the tournament by defeating the Supreme Court Project but fades late, garnering only 44 percent of the vote. The young upstart TICA wins over NABA by one vote!

Well, sheer numbers mean something, plus an extra year to deliberate. Adoptive Couple defeats Bay Mills with 62 percent of the vote. Controversy reigns in the Carcieri v. payday lending crowd, but Carcieri must scare (or excite) voters more, winning with 59 percent of the vote.

Now we move to Category 4, which is another miscellaneous category of sorts. Thanks for bearing with me through this.

Funny people. Appeared on The Daily Show and had a fine time with some Redskins fans. Went to football game, too.

Don’t get too excited. They haven’t won anything yet.

Feds are looking for you. Seriously, this time they want to give you money.

Brother ma’iingan won one this year. I called it. Not really.

Wait, we already covered this under Eric Holder.

Going strong after all these years, maybe more than ever. Cited 27 times by federal and state courts in 2014. Holy moly!

Won several important Indian law cases this year: got the Part 291 procedures invalidated, against Grand River Enterprises, got a criminal conviction affirmed where the non-Indian had originally been arrested by tribal, bunch of other stuff probably.

Last night the 1491s performed at the Kellogg and then came by the law school for a reception catered by the incomparable Eva Menefee. 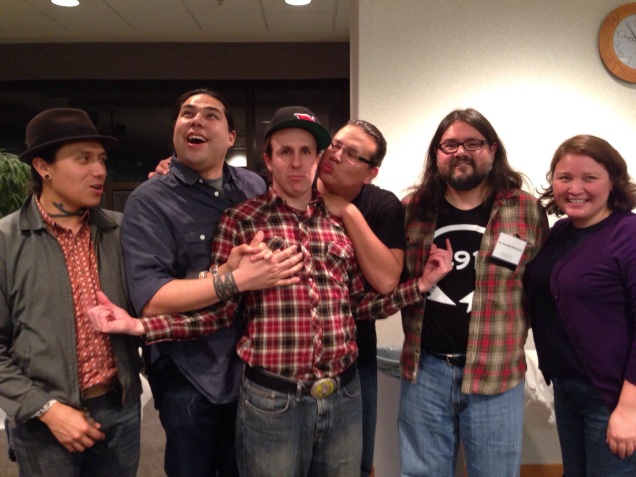 Good eats for all.

Estrella made it all happen.

Eric and Emily were there.

Another one, this time with Kate.