Tribal communities face a variety of unique obstacles to removing firearms from individuals who are prohibited from having them due to civil protection orders (CPOs) or criminal convictions for domestic violence.  Yet the CPO and criminal processes provide many opportunities for professionals to learn about and respond effectively to abusers’ access to firearms using existing laws.  The NCJFCJ and our partners have gathered examples of strategies from around the country to help Tribal and other communities take full advantage of these intervention opportunities so that they can better protect victims and others from firearms violence.
NCJFCJ, in partnership with the Office on Violence Against Women, is leading a Firearms Pilot Site Initiative (FPSI) that will provide training and technical assistance on these strategies and practices.  The project is a collaboration with the National Indigenous Women’s Resource Center (NIWRC) and other national TA providers (AEquitas, BWJP, CCI, the IACP, and Ujima), as well as expert practitioners from around the country. The FPSI will work with selected sites to assist them in developing interdisciplinary efforts to improve local implementation of firearms prohibitions in civil and criminal domestic violence contexts.
This webinar will discuss challenges and strategies pertinent to Tribal communities that are involved in efforts to effectively implement firearms restrictions in domestic violence cases.  It will also introduce professionals and communities to the FPSI, which soon will be selecting sites for in-depth technical assistance, training, and other support.  The NCJFCJ and its partners will assist selected sites in assessing their implementation efforts and challenges, identifying gaps, and developing partnerships among community stakeholders, including federal partners, to design and implement practices that will enhance victim and community safety.
Presented by:
Carolina LaPorte, Senior Native Affairs Advisor, National Indigenous Women’s Resource Center
Nancy Hart, JD, Senior Program Attorney, National Council of Juvenile and Family Court Judges
Darren Mitchell, JD, National Council of Juvenile and Family Court Judges Consultant

Link to register for webinar: here

Closed Captioning will be provided. The webinar will be 60 minutes long and will be recorded and made available to individuals who cannot participate in the live webinar. If you have further questions regarding this event, please contact Alicia Lord at alord@ncjfcj.org.

Is your community doing all it can to prevent firearms-related violence perpetrated by abusers in DV cases? Are you encountering challenges to implementing existing state, tribal, & federal firearms restrictions? Learn about strategies for effective implementation at all stages of civil & criminal DV cases, as well as a new national project, the Firearms Pilot Site Initiative, through which the NCJFCJ & other national experts will provide communities with in-depth TA, training, & other support.

Link to register for webinar: here

*A similar webinar with information specific for tribal communities will be held May 22, but people from all communities are encouraged to attend whichever one is most convenient.

Closed captioning will be provided. The webinar will be 60 minutes long and will be recorded and made available to individuals who cannot participate in the live webinar. If you have further questions regarding this event, please contact Alicia Lord at alord@ncjfcj.org.

The National Indigenous Women’s Resource Center (NIWRC) in partnership with the National Domestic Violence Hotline (NDVH), is excited to announce that the StrongHearts Native Helpline, to be staffed by Native advocates, is scheduled to launch on January 4, 2017. The goal of the StrongHearts Native Helpline is to ensure that Native victims of domestic violence can access safety in a culturally relevant manner and eventually live their lives free of abuse.

As a result of an unexpected acceleration of our development timeline, NIWRC has agreed to house StrongHearts in Austin, Texas with the National Domestic Violence Hotline, to allow StrongHearts staff to receive direct support and mentoring from the NDVH. This is important in building a strong base aimed at enhancing services and outreach to tribal communities and Alaska Native villages. New Hires are expected to live in Austin, TX for initial start up time frame, then relocate to permanent Helpline office in Tulsa, OK.

Available on our website are the current vacancies as well as attached to this email are the job announcements and NIWRC job application forms. Please feel free to forward these on!

*Please review individual job announcements for details. To submit your application electronically you must first DOWNLOAD THE PDF.

Please contact Tang Cheam if you have any questions at tcheam@niwrc.org

A new website is now available with the express purpose of providing sex trafficking information and resources for tribal domestic violence and sexual assault coalitions. The link to the site is here.

Additionally, we envision this site as a place for Native women to find help when dealing with violence. Individuals can reach out to their local Tribal Coalition(s) for assistance or they can easily use our Victim Services Directory themselves. We suggest, however, that individuals contact their local tribal coalition for assistance first. A Tribal Coalition can help individuals navigate options and services, and utilizing coalition connections can increase a client’s chances of receiving services or referrals immediately.

The site includes federal, state, and tribal laws, articles, resources, and information about victim services and will continue to include new information as it becomes available.

Legal Aid of Nebraska, a law firm providing free civil legal services to low-income persons, seeks an attorney to serve Native American victims of domestic violence in Western Nebraska.  Must be admitted to practice in Nebraska or have a Nebraska license pending, and be licensed or willing to become licensed in the Ponca, Winnebago, Omaha and Santee Tribal Courts. This position entails extensive travel throughout panhandle and Cherry counties.

Duties will include but will not be limited to:

The attorney in this position also provides quality and aggressive representation of low-income Native American domestic violence victims who are clients of LAN primarily in state court, and, engages in the day-to-day practice of law according to the priorities and practices set by Legal Aid of Nebraska.  Ideal candidate will possess expertise in the area of domestic violence and have a connection to Native American issues.  This is a full-time position requiring a committed individual.  Company cell phone and laptop will be provided.  Location in Scottsbluff, Nebraska. 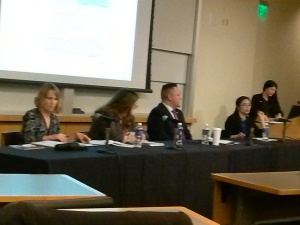 Here’s a picture from Seattle University School of Law’s very inspiring VAWA Panel tonight. Left to right, the panelists were Molly Cohan, Sharon Jones Hayden, Alfred Urbina, and Ye-Ting Woo. Most of the handouts are here.

Among the many things I learned is that the one of the Pascua Yaqui Tribe’s first VAWA cases involved a same-sex couple. It was originally thought that this case might turn out to be the first tribal VAWA case to go through the federal habeas process and to eventually reach the Supreme Court, but the jury was uncertain as to whether the victim and defendant were in an intimate relationship as required by VAWA and so the defendant was acquitted. Given that the defendant and victim lived together and had a sexual relationship, this skepticism is troubling and, sadly, may reflect unconscious homophobia. There are still many positives, however. Despite the acquittal, the case helps shed light on a hidden problem–same-sex domestic violence is still a little-known and rarely mentioned phenomenon. Kudos to Pascua Yaqui for bringing the case. The prosecutorial response on its own was undoubtedly meaningful to the victim. And, given the jury’s acquittal, the case stands as a strong example of a tribal jury’s impartial treatment of a non-member.

Excerpts from the article:

A flawed reporting system between tribes and outside authorities allowed a man to buy a handgun later used by his son to kill four classmates and himself in Washington state — a problem state and federal agencies have long known about but haven’t fixed.

A domestic violence protection order issued by the Tulalip Tribal Court should have prevented Raymond Lee Fryberg Jr. from buying firearms. But the order was never entered into any state or federal criminal databases, as it would be if it came from a Washington county court.

Critics say that’s because state and federal officials have failed to establish a system that allows tribal courts to enter those orders directly, or create a process that ensures it happens easily.

Fryberg passed a background check when he bought one of the guns his son, Jaylen, used in an October shooting at his high school north of Seattle. Had the protection order been in a database, Fryberg would have failed the check and been denied the gun.

A key problem is logistics. There’s no uniform way to enter information on tribal protection orders into state databases or the National Instant Criminal Background Check System, and such reporting is not required by law.

“I can’t think of a single tribe that wants abusers to have access to firearms, but despite our efforts, we keep hitting roadblocks,” said Sarah Deer, a professor at William Mitchell College of Law in Saint Paul, Minnesota.

Stephen Fischer Jr., with the FBI’s Criminal Justice Information Services, said some tribes enter protection orders into a national database themselves, while others have agreements for state or local agencies to do it for them. Some tribes have no involvement with federal and state databases.

Tulalip Tribes attorney Michelle Demmert has said in testimony to the U.S. Justice Department that tribal courts should not have to go through the states to enter data.

“As sovereign nations, we should not be treated as subservient partners to the state,” she said.

The National Congress of American Indians said entry of tribal court cases often is done through agreements with state or county agencies, but that data entry “is frequently denied or delayed, thus jeopardizing victim safety.”

The organization called on the U.S. attorney general to review how criminal databases are accessed, consult with tribal governments and develop a remedy.

In another article posted on Indianz.com, full article here, Judge Richard Blake, current president of the NAICJA board said,

“This problem is not a local problem or unique to the Tulalip Tribes. The issue of lack of entry of tribal protection orders in state and federal databases is a national crisis,” said Richard Blake, a member of the Hoopa Valley Tribe of California who serves as the president of the board of directors for NAICJA.

At the state level, Blake noted that tribes are barred from submitting data by the Washington State Police. So some tribes, including Tulalip, have entered into agreements in which local courts submit the information to the state database.

But Blake, who served as chief judge for his tribe, said the process is not flawless. Without direct tribal access, cases could fall through the cracks.

“We had hoped that with the passage of the Tribal Law and Order Act of 2010 which mandated the federal government to provide access to federal databases that this critical gap in public safety would be closed,” Blake said. “But here we are five years later and the U.S. Department of Justice and the FBI are still in violation of the statutory requirement that tribes be given direct access to the NCIC system.”

Here’s a Seattle Times article about the fact that the gun Jaylen Fryberg used to shoot himself and several classmates in Marysville, Washington last fall was purchased illegally by his father. The father was subject to a permanent tribal restraining order for a domestic assault in 2002. Although the 2002 domestic assault predated the amendment to the federal law (see 18 U.S.C. 921(a)(33)) that disallowed those convicted in tribal court for domestic violence crimes from owning guns, the elder Fryberg had been convicted of violating the restraining order after that amendment became effective. Therefore, the problem appears to have been that the tribal court information did not make it into the federal database.