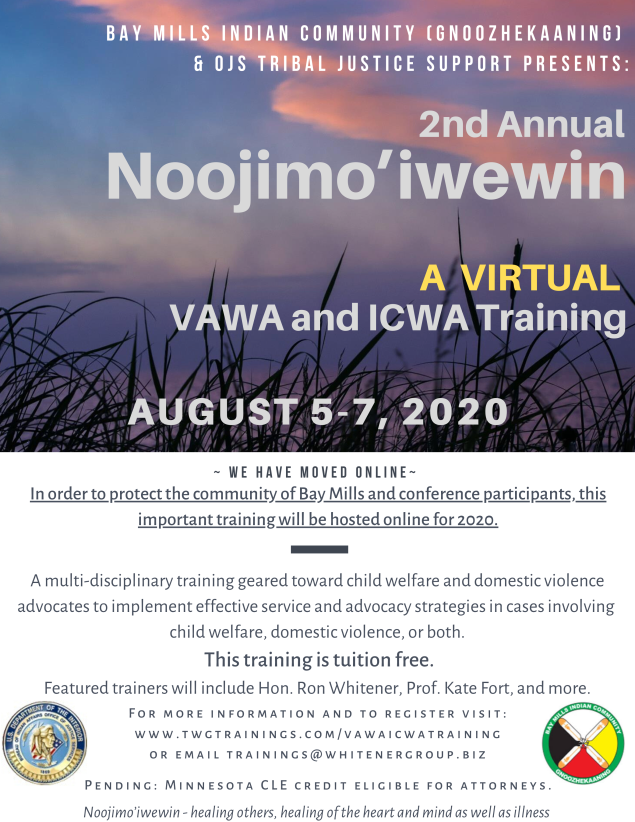 PDF save the date, Noojimo’iwewin: VAWA and ICWA Training

The Office of Justice Services (OJS), within the Bureau of Indian Affairs (BIA), is searching for an individual to serve as a Deputy Associate Director with the Tribal Justice Services Directorate.  Do you have experience in tribal court based initiatives which have promoted tribal court functions?  Do you have experience in civil and criminal functions within a tribal court?  Have you provided technical guidance and training for tribal court issues, including criminal, civil and traditionally based alternative resolutions?  Do you have an interest in working with tribal communities in the initial stages of creating a tribal justice system?  Do you have knowledge on Public Law 280 and the Indian Civil Rights Act?  Are you interested in travel?  Is so, this could be the job for you!

The major duties of the position include, but are not limited to the following:

No charge for the seminar. Selected participants are responsible for their own airfare, accommodations, and meals.

Child Welfare Evidence Training will be repeated in three other venues regionally in 2016, as organized by the federal government. Current venues for future training include Montana and Michigan. One other site is to be determined in the southern region.

All applications must be submitted by FEBRUARY 12, 2016 to Mercedes Garcia at mercedes.garcia@pascuayaqui-nsn.gov. Participants will be notified by FEBRUARY 15, 2016, regarding their selection.

From the federal press release:

The result of a collaborative effort by the Bureau of Indian Affairs Office of Justice Services (OJS) and DOJ’s Access to Justice Initiative (AJI), the Tribal Court Trial Advocacy Program is the first national effort by DOI and DOJ to offer trial advocacy training with courses designed specifically for tribal courts and free training to the judges, public defenders and prosecutors who work in them. Training is provided in three topic areas – domestic abuse, illegal narcotics and sexual assault on children and adults – with faculty and instructional materials prepared by experts knowledgeable about tribal court issues. The program is unique because it also has training specifically for public defenders.

For more information about the DOI-DOJ Tribal Court Trial Advocacy Program, which training topic will be offered at which site, and how to register for upcoming sessions, contact the BIA’s Indian Police Academy at 575-748-8151.