Here is a link to the article.

On page 38, Sabrina gives a short description of the article in English that states:

Enshrined in Hawaiʻi’s constitution, the legal foundation for Hawaiian language rights awaits statutory implementation. In the gap between legal justification and practical operation, speakers of Hawaiʻi’s indigenous language are once again being compelled to express themselves in English to access essential government programs. The State of Hawaiʻi has a role and responsibility in redressing the government actions that forced Hawaiʻi’s language shift. The reluctance of elected officials to develop a comprehensive plan to operationalize the constitution stands in direct contravention to the intent and mandate of Article XV, Section 4 of the Hawaiʻi State Constitution. As an official but critically endangered language, a statutory infrastructure for Hawaiian language access would support revitalization efforts and provide long- awaited mechanisms to obtain translation and interpretation services statewide.

And here is a link to Ka Huli Ao’s blog post about the article.

The lawsuit was settled, and the Settlements can be seen here:

Our first season focuses on language as law: within the context of language revitalization, how do Indigenous laws pronounce themselves through language? How can Indigenous laws be strengthened, given the impact of colonialism on Indigenous languages? And can the changes required to revitalize—funds, experts, and the privileging of resources—create additional inequities? This season seeks to answer these questions among others.

This season aims first and foremost to address the crucial relationship between language and law: in particular, the role Indigenous languages play in articulating Indigenous laws. Writing about the Navajo people, Anishinaabe scholar Matthew Fletcher emphasizes, “for many tribal communities, the law is encoded right into the language – and the stories generated from the language.”1 Because most Indigenous communities historically expressed (and continually express) their customs and laws orally, this statement applies to Indigenous groups broadly.2 This season features contributors who explore expressions of law and answer questions about how language deepens and complicates protocols, interpretations and worldviews.

We recognize inherent challenges in this exercise: communities experience “law” in different forms and may not identify practices and behaviours as law in the same way that they are identified in Western legal normativity. What one group claims as “law” may be something entirely different to another; and not everything is translatable into English or French—nor should it be. As John Borrows stated, “context should not be stripped from the practice of Indigenous law.”3 Often, that context is language. Our contributors this season help to tease out how Indigenous languages limit and liberate, stymie and enable, and generally complicate the articulation of Indigenous law.

Indonaakonigewininaan – Toward an Anishinaabe Common Law by Matthew L.M. Fletcher

2 Ibid at 41, “Indian cultures (often) were and are oral cultures.”

Here is “A Native American ‘Sesame Street’ could help save dying languages.“

The Northwestern Tribes’ Canoe Journey wrapped up this past weekend in Campbell River. Here’s Matika Wilbur’s beautiful blog documenting the Journey. I was privileged to attend the Muckleshoot landing. 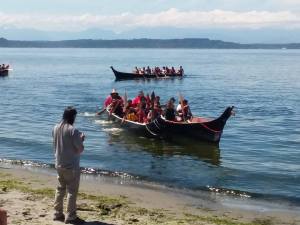 Here’s the article by Julian Brave NoiseCat. Thanks to E.E. for the link.

This panel explained the difficulties in finding accurate words in the Yup’ik language for court terminology, particularly in cases of sexual assault and domestic violence.