Here is the opinion.

The Grand Forks Herald reports (h/t Pechanga) that the North Dakota legislature voted to repeal the law requiring the University of North Dakota to maintain the “Fighting Sioux” name and logo.

Some legislators were sad, though:

Sen. Dick Dever, R-Bismarck, told his colleagues that he had lain awake the night before, thinking about the Fighting Sioux nickname issue.

It’s frustrating, he said, after listening to many Sioux Indians — North Dakotans — say they look at the nickname with pride “and don’t think it’s hostile and abusive.”

“We need to let this go,” Dever said, “but we need to keep that heritage alive, and I know they will.”

Heritage, eh? Here is a taste of the heritage of the Fighting Sioux name and logo: 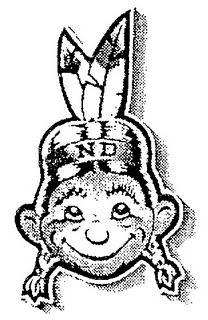 2. More “Heritage” of the Name and Logo END_OF_DOCUMENT_TOKEN_TO_BE_REPLACED

Here is the opinion in Davidson v. State. Briefs and oral argument materials are here. And the UND Board “killed” the nickname.

Eight members of the Committee for Understanding and Respect (“plaintiffs”) appeal from a district court judgment dismissing their action against the State Board of Higher Education to enforce a settlement agreement in a prior lawsuit by the University of North Dakota (“UND”) and the Board against the National Collegiate Athletic Association (“NCAA”) and to enjoin the Board from shortening the time period for the Spirit Lake Tribe and the Standing Rock Sioux Tribe to consider approving or rejecting UND’s use of the “Fighting Sioux” nickname and logo. Because we conclude the district court did not err in interpreting the language of the settlement agreement, we affirm.

FARGO, N.D. (AP) — Some University of North Dakota officials were hoping that a long-running dispute over the school’s Fighting Sioux nickname would be settled this week. Now it appears it could continue for several months.

A state judge ruled last month that the North Dakota Board of Higher Education has the power to drop the Fighting Sioux nickname and Indian head logo before a November deadline set as part of a settlement with the NCAA. The board promptly moved Thursday’s regularly scheduled meeting — originally to be conducted by conference call — to the university’s campus in Grand Forks to discuss plans to officially retire the moniker.

But the issue might not be debated for long.

Patrick Morley, the attorney for a Spirit Lake Sioux group that sued to keep the nickname, filed an appeal late Friday to the state Supreme Court. Morley did not return repeated phone calls by The Associated Press.

From the Grand Forks Herald:

A district court judge has dismissed a lawsuit filed against the North Dakota State Board of Higher Education that sought to prevent the body from retiring the University of North Dakota’s controversial nickname.

Judge Michael G. Sturdevant said in his decision that he would’ve preferred otherwise, but he can see no legal reason that the state board could not change the nickname. Nevertheless, he rapped the board for its failure to fight hard to keep the Fighting Sioux nickname.

The higher education board had earlier set an Oct. 31 deadline for both Sioux tribes in the state to approve the nickname and, at its last meeting in November, did not extend the deadline. Because of the litigation, though, the board never formally instructed UND to retire the nickname.

Nickname supporters in the Spirit Lake Dakotah Nation, which approved the nickname by a 67 percent vote, sued shortly before the November meeting seeking to buy time for members of the Standing Rock Sioux Tribe to rally for a similar vote.

END_OF_DOCUMENT_TOKEN_TO_BE_REPLACED

But oh so slowly….

Bismarck, N.D. (AP) The chairman ofNorth Dakota‘s Board of Highereducation says it appears more likely that the University of North Dakota’s Fighting Sioux nickname and logo will be changed.

The board wants the nickname issue resolved by the end of this month. Murphy’s letter says the nickname and logo issue isn’t a big priority for his administration.

Murphy also questions the board’s demand for a 30-year agreement to allow U-N-D to use the nickname and logo. He says the tribe is willing to discuss the issue “without deadlines and without stipulations.” Smith says board members want to get the issue resolved. Board member Grant Shaft says he doesn’t think there’s much willingness to extend a decision deadline beyond Dec. 31.

END_OF_DOCUMENT_TOKEN_TO_BE_REPLACED

A new deadline probably dooms the UND Fighting Sioux nickname and logo. That’s just as well. It’s been clear for some time that the name and logo couldn’t survive.

The reason is simple enough.

No matter the appeal of the name, the pride in it and the support for it, its use had become corrosive, damaging to the university and the state.

That’s why the Herald has urged dropping the name, sooner than later.

Opponents would never abandon the fight against it, even in the face of demonstrated support among the state’s Sioux people. That became clear in the wake of a vote last month at Spirit Lake.

The board left a small window for supporters of the name and logo. They set an Oct. 1 deadline.

At the same time, they raised the bar. The name can be retained only if the tribes agree to allow its use for at least 30 years.

Meeting these conditions will be so difficult, for so many reasons, that the name and logo appear effectively dead.

North Dakota’s Board of Higher Education has approved a schedule for discarding the University of North Dakota’s Fighting Sioux nickname and Indian head logo if two Sioux tribes hold firm in their desire to have them dumped. The timeline directs William Goetz, the university system’s chancellor, to form a committee to discuss the issue with the Standing Rock and Spirit Lake Sioux tribes. The panel should meet at least twice with Sioux leaders in 2009. If there is no agreement, the timeline says, the university should begin planning in January 2010 to retire the nickname and logo.

DENVER – All four colleges brought fans from all over the country to watch the best hockey teams in the country. But only one brought with it a mascot deemed officially “hostile and abusive” by the NCAA.

“We are nothing more than mascot images (to them). We are not human beings,” said Franky Jackson, a former North Dakota resident and current member of the Sisseton-Wahpeton Dakota Sioux tribe.

The University of North Dakota athletic teams have been called the “Fighting Sioux” since the 1930s. Over the years, the logo has evolved but remained a feather-wearing, male warrior, which Jackson says is insulting.