Here is the opinion in Gustafson v. Poitra: Opinion

Linus and Raymond Poitra appeal the district court judgment of eviction. The Poitras argue the district court erred by exercising jurisdiction over this matter, and by sending a North Dakota law enforcement officer onto the reservation to evict tribal members from property within the Turtle Mountain Reservation. We affirm.

Here is the complaint in Grenier v. Dept. of Interior (D.N.D.):

Here is the opinion in Gustafson v. Poitra.

Here is the opinion in State v. Peltier. 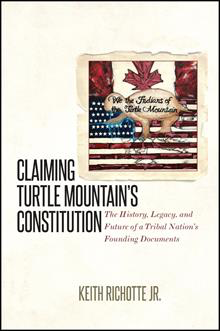 In an auditorium in Belcourt, North Dakota, on a chilly October day in 1932, Robert Bruce and his fellow tribal citizens held the political fate of the Turtle Mountain Band of Chippewa Indians in their hands. Bruce, and the others, had been asked to adopt a tribal constitution, but he was unhappy with the document, as it limited tribal governmental authority. However, white authorities told the tribal nation that the proposed constitution was a necessary step in bringing a lawsuit against the federal government over a long-standing land dispute. Bruce’s choice, and the choice of his fellow citizens, has shaped tribal governance on the reservation ever since that fateful day.

In this book, Keith Richotte Jr. offers a critical examination of one tribal nation’s decision to adopt a constitution. By asking why the citizens of Turtle Mountain voted to adopt the document despite perceived flaws, he confronts assumptions about how tribal constitutions came to be, reexamines the status of tribal governments in the present, and offers a fresh set of questions as we look to the future of governance in Native America and beyond.

For more information and to read an excerpt, visit the book page.

Here is the complaint in Grenier v. Delorme (D.N.D.):

On or about March 18, 2010, Plaintiffs and Defendant entered into a ten – year Lease of Real Estate (“Lease”) for Defendant’s land located at tract number 324-5065 and described as E/2NE/4, of Section 3, Township 161 N., Range 71 W., Rolette County, North Dakota. This land is not located on the Turtle Mountain Reservation, but is trust land. A  copy of the Lease is attached hereto as Exhibit A. Prior to entering into the Lease, Plaintiffs had farmed the land subject to the Lease for over thirty years.

North Central Electric Cooperative appeals from a district court judgment affirming a Public Service Commission order dismissing North Central’s complaint against Otter Tail Power Company after the Commission decided it did not have regulatory authority over Otter Tail’s extension of electric service to a facility owned by the Turtle Mountain Band of Chippewa Indians on tribal trust land within the Turtle Mountain Indian Reservation. North Central argues (1) the Commission’s decision is not in accordance with the law because the Commission has jurisdiction under North Dakota law and (2) the Commission’s findings are not supported by a preponderance of the evidence and do not sufficiently address North Central’s evidence. We affirm, concluding the Commission did not err in deciding it lacked authority to regulate the Tribe’s decision to have Otter Tail provide electric service to a tribal-owned facility on tribal-owned land within the reservation.

P is a Delaware corporation, wholly owned by T, an Indian tribe. For the years at issue P attempted to file consolidated returns with C, another corporation wholly owned by T. P contends that T is the common parent corporation of P and C and that together they constitute an affiliated group eligible to file a consolidated return. On the returns filed, P did not claim Indian employment credits under I.R.C. sec. 45A even though P was entitled to them; instead P deducted the entirety of its employee expenses. R determined that the consolidated returns that P joined in filing were invalid and that P was required to claim a credit under I.R.C. sec. 45A and reduce its wage deduction by the entire credit amount (without regard to credit limitations for particular tax years). P now contends that it is not subject to corporate income tax because it is an integral part of T, which because it is an Indian tribe is exempt from income tax.

Held: P, as a State-chartered corporation, is a separate and distinct entity from T and is not exempt from the corporate income tax.
Held, further, the consolidated returns filed for the years in issue were invalid because T, as an Indian tribe, was not eligible to join in the filing of a consolidated return, and P and C alone did not constitute an affiliated group.
Held, further, the Indian employment credits under I.R.C. sec. 45A are not elective; and as a result, P’s employee expense deductions for the years at issue must be reduced by the amount of the credit as determined under I.R.C. sec. 45A without regard to limitations on the allowable amount of the credit.Uni